Exactly 16 years earlier, on June 2nd 1925, Gehrig broke into the Yankees starting lineup for the first time.
Yankees 1B Wally Pipp was a fixture in the lineup since 1915, but was mired in a bad slump and the Yankees were 15-26.
Pipp was complaining of a headache on June 2nd, so Yankees Manager Miller Huggins said “take the day off, we’ll try that kid Gehrig at first today and get you back in there tomorrow.”
Pipp never reclaimed his starting job.

Gehrig played 15 years with the Yankees until he was forced to retire in that 1939 season after being diagnosed with ALS, which would later be known as Lou Gehrig’s Disease.

Along the way, here were some of Gehrig’s accomplishments

Held the record for most grand slams in a career with 23.

Hit 493 home runs in his career, setting the record for the most home runs hit by any first baseman in history until Mark McGwire hit 500.

His 184 RBI's in a single season (1931) is first in American League history and second in baseball history (behind Hack Wilson's 190 RBI's with the Chicago Cubs).

Set a record by playing in 2,130 consecutive games in a row, despite 17 fractures in his hands, being beaned several times, having severe back pain, and well into his body deteriorating with the onset of ALS.  Gehrig's streak ended on May 2nd, 1939 and would stand for 56 years until Cal Ripken Jr. broke it in 1995.

Became the first athlete to have his number retired. Upon his retirement from baseball in 1939, the New York Yankees retired his No. 4 jersey. Today, the practice of retiring jerseys numbers is carried out in most sports.

Gehrig was inducted into the Baseball Hall of Fame in 1939. In light of his progressive illness, the usual two-year waiting period after a player retired was waived in Gehrig's case.

Midway through the 1938 season, Gehrig began to feel physical changes in his body.
“I tired mid-season.  I don’t know why, but I just couldn’t get going again.”

By 1939 it was clear something was wrong with Gehrig.

James Kahn, a beat writer who covered the Yankees, said “I think there is something wrong with him. Physically wrong, I mean. I don't know what it is, but I am satisfied that it goes far beyond his ball-playing. I have seen ballplayers 'go' overnight, as Gehrig seems to have done. But they were simply washed up as ballplayers. It's something deeper than that in this case, though. I have watched him very closely and this is what I have seen: I have seen him time a ball perfectly, swing on it as hard as he can, meet it squarely—and drive a soft, looping fly over the infield. In other words, for some reason that I do not know, his old power isn't there... He is meeting the ball, time after time, and it isn't going anywhere.”

On June 19th, 1939, Gehrig was officially diagnosed with Amyotrophic Lateral Sclerosic (ALS).
It was his 36th birthday.

Gehrig wrote to his wife Eleanor “There isn’t any cure.  There are very few of these cases.  It is probably caused by some germ…never heard of transmitting it to mates.  There is a 50/50 chance of keeping me as I am.  I may need a cane in 10 or 15 years.  Playing is out of the question.” 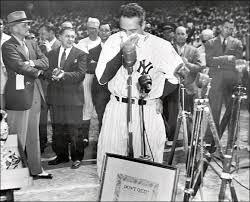 How good of a hitter was Gehrig?
In 1938 when it was clear that something was wrong with him and his body showed the first signs of deterioration, he hit .295 with 29 HR’s and 114 RBI’s.

Lou Gehrig was a legend of the game.
But his legend spans far beyond the playing field.
He took the worst life had to offer and handled it with grace and dignity.
That is something we can all learn from.

Today, SCLL honors the memory and spirit of Lou Gehrig.