When you think about the most tortured sports cities in America, Cleveland, Buffalo, Washington D.C., and Minneapolis are at the top of most people’s lists.
San Diego does not typically come to mind.

The San Diego Clippers played from 1978-1984 before relocating to Los Angeles.
This franchise was so bad they don’t even have a Wikipedia page.
Even Wikipedia wants to wipe their existence from history.
The most memorable thing about the San Diego Clippers is they gave us perhaps the worst owner in sports history, Donald Sterling.

With the Clippers and Chargers out of town, that leaves San Diego with the Padres as their only professional sports team in the Big 4 sports.
The Padres have fit right in with zero World Series titles since becoming an expansion team in 1969.

So for those keeping score at home, that’s 111 seasons, zero championships.

The most memorable sports figure to come out of San Diego in that entire time might be the San Diego Chicken. 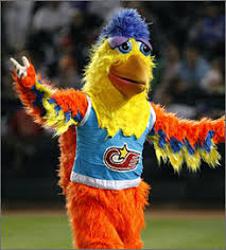 Or was it Ron Burgundy?

San Diego has made it to 3 championship games.
In all 3 contests, San Diego had no chance.
Lloyd Christmas had a better chance of hooking up with Mary Swanson than those teams had of winning a championship.

The 1984 Padres faced the Detroit Tigers, one of the best and most underrated teams ever.
That Tigers team had Alan Trammel, Lou Whittaker, Kirk Gibson, Jack Morris and Willy Hernandez.
One year later and the Padres would have caught the 1985 Royals in the World Series, arguably one of the worst World Series teams ever.

The 1998 Padres faced the New York Yankees, who won an MLB record 125 games including playoffs.
Some consider that 1998 Yankees as the best team ever, with Derek Jeter, Jorge Posada, Bernie Williams, and Mariano Rivera.

And we haven’t even mentioned the "Holy Roller" by Ken Stabler, the game that gave the San Diego Chicken a heart attack in the stands.
Or the 1982 AFC Championship game where the greatest offense to that point in NFL history, the “Air Coryell” Chargers were no match for the sub-freezing temperatures in Cincinnati in the 2nd coldest game in NFL history.

It has been a tortured 111 seasons of sports history in San Diego.

But on the bright side, San Diego has great microbreweries.
They have spectacular beaches.
They have beautiful women.
They have T-Shirt weather year-round.
And they have fantastic fish tacos and guacamole.

But now there is hope on the horizon for the Padres.

Manager Rich Murphy hopes to bring San Diego its first championship.
After a rough start, the Padres were one of the best second half teams in Majors last season.
Andrew Stewart led the way for the Padres in 2017 as the Padres finished in the Top 3 in most offensive categories.
A solid playoff showing has given the fans hope that the momentum will carry over to 2018.

The Padres biggest off-season acquisition was OF Richard LaGrill.
LaGrill is arguably the top offensive talent in the league this year.
He blasted 4 home runs for the Athletics last year in his 11 year old season, which led all 11 year olds.
And he won a championship with that Athletics team, so he has been there before and will be counted on to provide veteran leadership to the 8 kids that played AAA last season.
And word on the street is that LaGrill is working on being a switch hitter, which will add to his arsenal.

Another key acquisition for the Padres is 12 year old Danny Sullivan.
Sullivan was also on that Athletics team last season and will be another great source of veteran leadership.

The Padres have two returning starters from last season in 12 year olds Landon Murphy and Spencer Haderle.
Murphy and Haderle spearheaded the Padres second half surge last year and look to be the sparkplugs to keep the momentum going in 2018.

The Padres will also rely heavily on the 8 kids who played AAA last year.
Robinson Hirano, Johnny Lehman, Woody McMahon, Henry Odom, Tyler Berringer, Nate Gotelli, Gavin Reynick, and Dylan Tanner.
These kids had great seasons in AAA and will now find themselves in prominent roles in the Padres organization.

Can season 112 produce a championship for the city of San Diego?
Can Rich Murphy and Scott Reynick do what no other Padre coaching staff before has done?

Long time Padre fans can enjoy the beautiful San Diego beaches this summer.
They can go to Coronado and La Jolla and soak in the rays.
They can have a microbrew and some of the best fish tacos and guacamole in the land.
But this summer they would like to finish their meal with something sweet, something they have never tasted before...a championship..